Bill Derry is a singer/songwriter/guitarist.  His music is: Adult Contemporary Acoustic “Island Escape” Music, the carefree vibe of Jimmy Buffett and the Zac Brown Band.

Make your event come alive with music by Bill Derry. Bill plays adult contemporary style music mixing the energy of rock with the laid-back vibe of Jimmy Buffett and Zac Brown Band. His music includes pop, rock, R&B, blues and jazz and he is comfortable performing covers or original music. Bill’s music is great for venues with limited space or where it is important to play quietly but with fun and energy.

Hi Bill, We were very flattered and honored to have you perform for us at Milagro. We think you were great and fit the restaurant concept very well. We will definitely consider you for live entertainment in the future.” General Manager Milagro Cantina – Kirkland 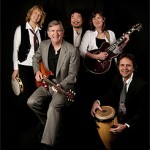 If you want your party rocking and people dancing, you want the Bill Derry Band. They play high-energy music from several decades that people know and that gets them up on their feet.

Listen to “You Look LIke A Samba” written by Bill Derry and performed by the “Sidekickers” below: