Bill is a singer/songwriter and guitar player.  He started playing guitar in the 5th grade and started his first rock band in the 9th grade.  He played guitar in his high school jazz band and sang in the high school choir.  He later sang in the University of Washington Chorale (by audition only).  He clearly has a variety of musical interests and is capable of performing in multiple styles.  His original music can be described as “Island Escapism” and he has been called the Jimmy Buffett of Puget Sound after his performances. 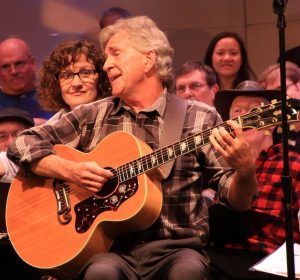 Bill sang in the Sno-King Community Chorale for four years.

Bill is an avid environmentalist, has been active in various environmental non-profits.  He was past President of the Board of Directors for People for Puget Sound. Check out: www.pugetsound.org/

He is currently President of Pilchuck Audubon Society. www.pilchuckaudubon.org/